So I guess the yearender story is long overdue. Original plans were to take Vanessa out to Death Valley two days after Christmas, with Nickel the boy wonder in tow. Fresh from the mechanic with a brand spanky new starter and solenoid, we had unwavering confidence that the veedub would roar into life bravely after each slumber, and putter along merrily into the depths of the desert. And for the first night, it did! It is widely known that the design of the VW type-2 Bus is most conducive to fun paced slacking rather than picking up the slack against soccer moms with 205hp Porsche SUVs on the highway. So the Vanessa Adventure Team (Paul, Kat, Nickel) found themselves two hours late, with the waning winter sunlight, outside of the park and decided to camp it out at this place called Walker Pass. Elevation: 5,000 feet. Probably not a good idea, but for all not-so-good ideas, great adventures are to be made and unforgettable stories to be told!

Hunger was averted when we barely had enough propane/butane fuel to boil water just to make two cups of noodles. Not only due to the lack of fuel, but to the damn cold.
It was literally freezing! The morning after, we discover that our water turned into a solid block of ice. Nickel’s water bowl was frozen solid. All our knees were shakin’!

The pit toilets were quite interesting too. The mens pit toilet told stories of an unfortunate camper’s bout with explosive diarrhea. I was curious about the women’s toilet, which I would’ve used if it were marginally cleaner. No dinero – some (most probably heavy-set) lady missed the hole and landed a massive chunk of brownie the size of a bigmac right on the toilet hinge. I kid you not, but I reeked for a full 15 minutes after subjecting myself for a mere 15 seconds in that hellhole. Imagine what that would smell like in the heat of summer? Yumm.

The next morning, we packed our gear as fast as we could to get the hell out of there. And so Vanessa tried to wake up. And tried. And stopped trying.

We spend another half hour waiting for the sun to come out and took turns underneath the car poking fun at the starter and solenoid for it to magically cough up its troubles and grant our wishes. And, just like the randomness of winning the lottery, the engine roared into life! Crawl underneath the bus count = 1. Start the bus count = 1. As long as the crawl count was equal to, or less than the start count, we were good. Well, as the trip progressed we eventually came up to an impressive count of 5, 5, when we were dealt with a joker card. In the outskirts of Zabriskie Point, the fuel pump started coughing up and the engine would wheeze like a suffocating fish before finally shuddering into a dead heap of metal. To make the long story short, we again played our chances fiddling with the innards and at least got the engine fired up, and running. The bus would randomly shudder through the rest of the abort journey back home, but the crew was all brave and ignored our worst-case-scenario fears of engine explosion and “by the way the fire extinguisher is expired” thoughts. What a day! Saga will be continued… Happy 2008, friends in real life and friendly strangers of the intarweb :) At 3am, this is how the Christmas tree lights up. With the help of a camera, a piece of foam, and a very curious boy. You don’t need Photoshop to have fun :) The van has been at the mechanic lately, and I’ve been paying her frequent visits as I start procuring various parts (tuneup, and emission).

They start work on her tomorrow. I hope she starts to feel better, since we have a long exciting adventure waiting after Christmas :) I’ve been on the road since Friday night, shuttling through different cities each day.

And so here she is, ladies and gentlemen. You can be assured that we will have more pictures of her to come :) 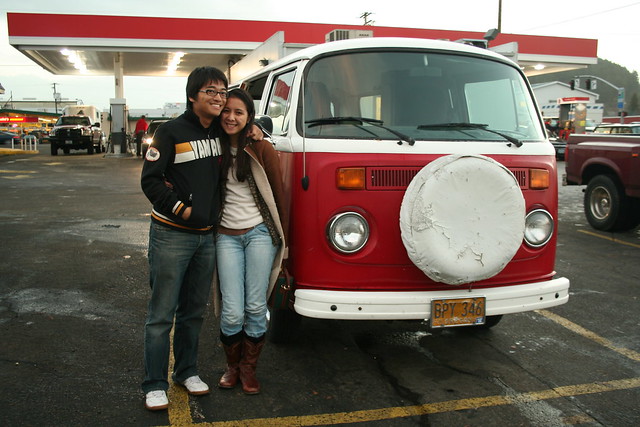 It’s been a hard day’s night… This is what I live for. Semblances of isolation. Adventure. A sense of taking control over my life, instead of rolling with life’s punches as everyone expects it to roll. It’s cliche, but it never really is about the destination – it’s how you take your strides, how you inevitably fall down, and how you manage to pick yourself up from your pieces and move on..